Notes from our most recent sermon are posted below each week. 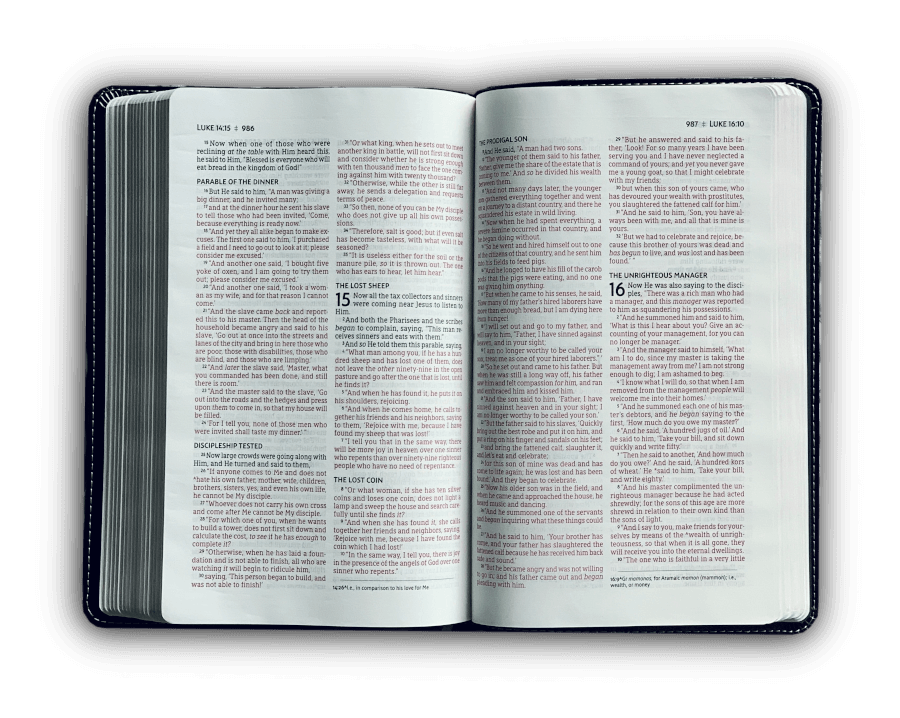 There was a man who loved money more than anything. He worked all his life and hoarded as much as he could. Just before he died, he told his wife, “When I die, put all my money in the casket with me. I want to take my money to the afterlife.”  She promised him that she would.

At his funeral, just before the undertakers closed the casket, his wife put a box in the casket. The casket was closed and rolled away. The wife’s friend said, “I know you didn’t put all that money in there with that man. You weren’t foolish enough to do that were you?”

There is coming a day when all our accumulated wealth is going to be just as good as that check. The issue of money has been a prominent one from the inception of the church. Jesus spoke a great deal about it himself. Consider this:

Why all this talk about money and possessions? It was because Jesus understood so well the tremendous influence of this issue in our lives.

I want to use 10 verses in Proverbs to illustrate this point. The title of my message this morning is “Rich Man, Poor Man” from Proverbs 28 – 31.

“A poor man who oppresses the poor is a beating rain that leaves no food.”

“Better is a poor man who walks in his integrity than a rich man who is crooked in his ways.”

·      Obviously, there are rich people who have integrity and poor folks who are crooked.

·      This verse tells us we are defined more by our character than we are by our bank account.

·      The Hebrew word for crooked literally means “in two ways”.

o   Pretending to have virtue

One writer put it this way, “Many will wish they had lived in obscure poverty rather than having been entrusted with riches, which only made them boldly sin with a high hand against God and their own souls.”

“Whoever multiplies his wealth by interest and profit gathers it for him who is generous to the poor.”

·      This verse talks about usury and extorsion.

·      Usuary/interest was the charge for borrowed money (30% of the amount borrowed).

·      Families were taken advantage of.

·      God will not allow the oppressors to have the last word.

“A rich man is wise in his own eyes, but a poor man who has understanding will find him out.”

·      It is not unusual for a rich man to be proud, and to think himself wise, but he will be found out.

·      Salvation calls for a radically different view of people.

o   The poor man should take pride in his high position.

o   Though he is materially poor, he has become spiritually rich in Jesus Christ.

o   The rich man should take pride in his low position.

o   Though materially rich, he has been humbled by the recognition that his riches cannot bring eternal life.

·       Both the rich man and the poor man find their hope in the spiritual reality of God’s grace in Christ.

·      The one who ignores work and follows worthless pursuits will not enjoy the work of the harvest the way a hardworking man would.

·      The last person will be guaranteed plenty of poverty.

·      Worthless pursuits are many and varied.

“A stingy man hastens after wealth and does not know that poverty will come upon him.”

·      Are your possessions possessing you?

·      Are you neglecting your spiritual life because you are consumed with accumulating more?

·      Is your family suffering so that you can maintain a certain lifestyle which you have come to associate with success?

·      Do you have trouble giving to God or people who might be in need?

·      Do discussions of money and possessions dominate your conversation with your spouse?

“Whoever gives to the poor will not want, but he who hides his eyes will get many a curse.”

·      One way to express that generosity is by giving to the poor.

·      God will not bless the one who ignores the trouble of the poor and needy.

“A righteous man knows the rights of the poor; a wicked man does not understand such knowledge.”

·      The righteous man considers the cause of the poor.

·      This means thoughtful compassion in action.

·      There are others who rebel against God’s wisdom.

One commentator writes: “His ignorance and lack of understanding is not an intellectual defect but the expression of an evil perversion.”

“The poor man and the oppressor meet together; the Lord gives light to the eyes of both.”

·      This is not the kind of “meeting together” or enlightenment this verse is talking about.

·      Despite the differences between the poor man and the oppressor, they have something in common.

·      God gives some kind of light or revelation in creation and conscience to every person (Romans 1:19-21).

·      That is to say all intelligence is a divine gift, however it is used. Sin messes everything up.

“Open your mouth, judge righteously, defend the rights of the poor and needy.”

·      The standard view was that spiritual standing was indicated by material standing.

·      The poor were ignored or punished by God and deserved no special courtesy.

·      The wealthy were blessed by God and should be shown favor.

·      The wealthy were viewed as spiritually blessed and worthy of special treatment while the poor were considered spiritually poor and treated poorly.

The Bible presents to us a radically different view of possessions and wealth.

·      True treasure, from the biblical standpoint, is our relationship with Jesus Christ.

·      It is the spiritual treasure of salvation and all that goes with it.

·      Earthly possessions are not eternal.

·      The spiritual treasure of Jesus Christ changes the way we view wealth and poverty. It is better to be earthly poor and spiritually rich.

·      Whether you have little or much in terms of earthly goods matters nothing when you stand before God.

·      The rich man and the poor man stand on level ground when they appear before the Lord of heaven and earth. Only the true treasure of Jesus matters then.

·      Even for the Christian, it is not the amount of material things we possess but how we use them that matters to God.

In conclusion, several mistakes are easy for believers to make when it comes to biblical teachings on wealth and poverty. Some assume that a loving God will make us rich (i.e., the prosperity gospel), or believing that poverty is always the result of sin (i.e., Job’s friends), or viewing wealth as inherently evil (i.e., materialism), or equating poverty with holiness (i.e., monasticism). The book of Proverbs repeatedly exhorts us to develop a proper and balanced view of wealth and poverty. As with everything else in the material world, so human beings are prone to distort biblical teachings, misunderstand God’s revelation, and misuse God’s good gifts. However, as we grow in Christ, believers can embrace what the book of Proverbs says about wealth and poverty.

How are you glorifying God with what He has given to you?

We are an active and vibrant church in Bloomfield, New Mexico, serving all of San Juan County. While providing a great atmosphere to worship and serve in at our campus, we are always looking for ways to impact our communities.
VISIT US!